This past weekend (15th-16th Oct 2016), the Southbank Centre hosted the YA Lit Weekender (#YALW) as part of their Literature Festival. The weekend was great fun, hosting talks, workshops, spoken word performances and a variety of stands. So who attended, and what did they say? I didn’t go to every talk and performance – I’m especially sad that I didn’t attend either of the spoken word performance sessions – because I am only one person and can sadly not clone myself on demand. However, I did take a bunch of notes over the weekend, and I thought you guys would find them interesting. So here we go!

Alex and Sally talked about their childhood influences, representation in YA, and planning your writing. Alex pointed out that all kids rebel – once the front door closes, parents have no control! But he does think that it’s easier now for young people to engage with politics and protest online rather than taking real action – in his youth, getting out on the streets was the only way to get your voice heard. In answer to an audience question about how they engage with YA culture now, Alex said he draws on friends’ experiences, and does youth work. Sally said that all people experience the same love, hate, fear and trepidation, and the hardest thing for her is actually remembering what she didn’t know as a young person, and replicating the level of innocence.

Both authors spoke about the fact that YA more than Adult Fiction is reflective of real, current changes and struggles – Melinda interjected with “2016 is a live-action dystopia that we’re all acting and starring in!” When discussing their writing methods, Sally said she was a ‘pantser’, and that not knowing what was going to happen next motivated her to write it, while Alex said that questions motivated his narratives. Alex and Sally both discussed the fact that while violence is commonplace in YA, sex is still a taboo subject – a topic which came up a few times throughout the weekend.

How Hard Can Love Be?

Holly Bourne, Femi Martin and Steven Camden (aka Polarbear) discuss love in all its forms. Chaired by Sarah Shaffi. 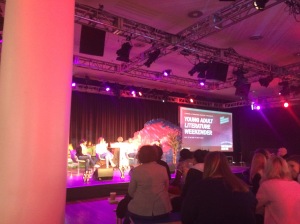 Holly, Femi and Steven talked about the value of love, whether romantic or platonic. There was a discussion about the portrayal of unhealthy and abusive relationships in YA, and Holly emphasised how important it is not to romanticise toxic relationships, especially in books for teens. She also pointed out that LGBT literature is still confined to its own shelf, even if that shelf is growing, and said that she would like it to be integrated into YA and other genres, rather than being a separate category (I would second this in the context of ‘LGBT’ being listed as a separate genre on NanoWriMo to fantasy, sci-fi, etc.). Femi even quoted statistics, saying that 49% of people under 21 don’t identify as straight, so it’s not as if it’s a niche market.

Malorie Blackman reads from and discusses her new book: a retelling of Othello set in space. Chaired by Lucy Drabble.

Malorie and Lucy discussed Malorie’s childhood influences – Shakespeare made a big impact on her once she started to see the plays performed, and Othello was the first black character she ever encountered, aged 17. She also discussed Chasing Stars – it was originally set in a boarding school but the protagonist kept insisting she was on a spaceship! Her current project is a dark fantasy – and that’s all she’ll say about it. She said that she loves YA because it’s very character-driven, which means the plot keeps moving forward. When she’s writing, the plot comes first, but the character is the most important thing.

David’s writing advice: “If you want to write a book, just keep doing it until you write one that people want to publish.” His first manuscript was a dystopia where music was banned – just as the dystopia craze was ending! His second book, out in May next year, will be printed in 360 different coloured covers. Harriet’s first manuscript was a Very Serious trilogy with Biblical/Wordsworth quotes at the beginning of chapters. Her next book comes out in Spring 2018 and includes an f/f romance. Patrice talked about the difficulties of writing a second book – it involves a lot of anxiety about whether it’s good enough compared to the first. Each recommended a book: Patrice recced Catherine Johnson’s Sawbones, David’s was Alice Oseman’s Radio Silence (one of many times this book was recommended over the weekend!), and Harriet’s was Sue Hitchcock’s The Smell of Other People’s Houses.

Find out how to get started on your own blog/vlog. Hosted by George Lester (@TheGeorgeLester)

This was interested for blogging ideas and general tips, including where to look for proofs (NetGalley, Bookbridgr, MP!), cross-posting reviews to Amazon and Goodreads, and where to check for events (Foyles, Waterstones, keeping an eye on Twitter). I found the list of weekly Twitter chats particularly useful: 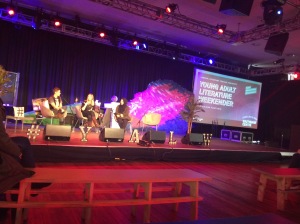 I missed the beginning of this because the Blogging workshop overlapped, and came in just as an audience member was raising the personal attacks Lily Allen has suffered since she went to the Calais Jungle, in a way that she wouldn’t have been attacked if she were a man.

On an audience question about whether or not female friendships in YA are always feminist, Sara said yes, as long as they were authentic. Marian raised the example of Celaena and Nehemia, describing them as “sisters who have finally met”. Sarah recommended Codename Verity, and Mariam recommended Alice Oseman’s Radio Silence, saying it was one of the few exceptions to the trope where a boy and girl can’t be friends in books. Mariam also said that it would be great to see more intersectional characters and their friendships, and recommended My Sister Lives on the Mantelpiece. Non pointed out that while the media tries to define and thereby divide sum writing can tell complex stories to unite people.

When does YA become simply A? Juno Dawson chairs a conversation about darkness in YA novels, with novelists Samantha Shannon and Jess Vallance.

A big focus in this panel was the disconnect between how accepting people are of violence in YA (very), compared to how accepting they are of sex (not at all). Jess Vallance declared age ratings pointless when trying to classify between Children’s, YA and NA (New Adult), and Juno suggested a traffic light system for sex, swearing and violence. Samantha talked about how her books are published on an adult list in the UK, because YA books can often get shelved in Children’s, and The Bone Season is definitely not that! She also pointed out that while NA was a helpful category to begin with (18-24), it has become rather nebulous, and is now mostly employed to describe “YA + extra sex”.

Juno also raised the point that people feel that Children’s/YA should be educational/moral. The responsibility lies in not romanticising drug abuse and violence – readers should see the consequences. She also pointed out that you should tell the story first, and then worry about the issues you’re portraying.

The Southbank Centre showcases some of the top prizes and award-winning authors in YA fiction, including Sarah Crossan.

When asked to define what makes a prize winner, Jenny said timing, luck and quality, and Caroline said it should be something that stands out, and will stand the test of time. There was a discussion about poetry (Sarah’s book One is written in verse), where Sarah made the really interesting point that we use poetry to negotiate occasions and rituals (weddings, funerals), but avoid it in everyday life. She tends to read poetry when she’s writing so that her style isn’t influenced by prose.

I asked a question about whether Jenny and Sarah feel/felt an expectation for their next book after they’ve won an award, and whether Caroline feels that there’s an expectation to choose specific books/kinds of books for the YA Book Prize. Caroline said there was a genre consideration – they’re looking to include a variety of books across YA. Jenny says she has a problem with expectation starting every ‘next book’, and tried to forget that she’s doing it! Not knowing what happens next motivates her to keep writing. Sarah said that everyone who wants to write is filled with self-doubt and self-loathing – the people who succeed are the ones who write anyway.

Final writing advice: Caroline says get into the routine of writing; Sarah says stop thinking up excuses for why you can’t write today. “Try lots, know very little, just do it!”

And on that note, as Jenny popped the party-popper, the YA Lit Weekender was over! I had a great time, and met some really lovely people – especially the three lovely MA students who were running the bookbinding workshops. So how about you guys? Were you at #YALW? Which was your favourite panel? What would you like to see more of next year? Let me know in comments!

Next up, YA Shot!